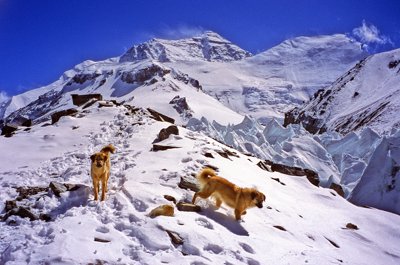 From the first night of our arrival, we realized that the Tibetan riverbank was inhabited by a pack of roaming dogs. Three coyote-size domestic mutts would come through the 17,000 ft. Everest Basecamp at three in the morning barking their fool heads off and making tired climbers cranky and grumpy towards the dog pack. But we all have dogs back home, so come daylight we are giving away dog treats.

On our first scouting hikes up the Rongbuk Glacier valley, a sweet little, roll-on-her-back, scratch-my-belly kinda dog started tagging along for a day hike. Her name became Stir Fry and her brothers were tagged as Deep Fry and Pan Fry. Only Stir Fry would accept petting. When the Yak train arrived, the dogs happily joined in for the two-day hike up to the 2,1000 ft. camp on the East Rongbuk Glacier. The Tibetan people just ignore the dogs completely, as do the yaks.

The dogs like to sleep on a pile of dried grass, which was leftover from the yaks' food supply. In the evening we placed our dinner leftovers on a rock outside the kitchen tent. The dogs come through in the night to clean up the scraps.

One day, Ed and I were hanging out in basecamp watching the alpine sun set on Everest when Deep Fry came racing through camp with a five pound chunk of meat. Ed got up to see if it was something of ours that the dog had snatched. Deep Fry was so full from pigging out on pig that he dropped what was left of a side of salted pork. No pork is on our menu, so we figured that our new neighbors up valley, the Hungarian Team, just got introduced to the Dogs of Everest. After that, we referred the Hungarians as the Hungry People.

As our climbing team continued to make progress up the glaciers of Mt. Everest, one of the dogs would always be along for the hike. When we moved into the 21,000 ft. camp, Deep Fry and Stir Fry also moved in.

One day Gopal and I roped up for a climb through the crevasses of the Rongbuk Glacier to the base of the North Col. Deep Fry followed along. We were roped in, harnessed up, with crampons on and ice axes out as we watched this dog romp and frolic in the snow around us.

When we reached the 21,500 ft. level of Mt. Everest, the mountain became very steep. The route wove around vertical ice cliffs on 65 degree snow ramps for 800m of climbing, until we reached the North Col at 23,000-plus ft. 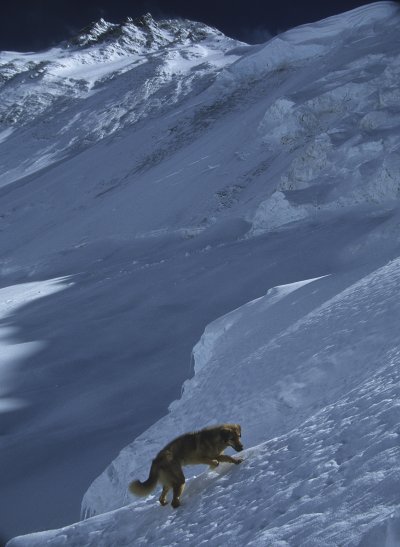 September 15th was our first day to tackle this cliff. The goal was to string up a 200m reel of 8mm Sterling rope. The slope was about 50 degrees with a 75 degree bulge 150m up. There are three or four small crevasses where the glacier meets this cliff, one of which has a ski pole marking the grave of a fallen climber. This grave is 50 feet from our climbing route and makes a serious statement about our extreme commitment to this project.

As I approached this cliff, Deep Fry charged ahead to tackle the first pitch. After 40 ft. the 50 degree slope defeated him, and he couldn't make any more progress. He came back down, found a chunk of ice from an old avalanche and curled up beside it.

For the next two days, Gopal and I worked on the face, installing 200m of rope each day. The dogs traveled to the foot of the cliff but did not follow us. Finally, on the fourth day of climbing, the North Col was within reach.

As we lead the last 200m, our friends, the Hungry People, arrived after climbing our ropes. We were on an ice ledge at around 22,700 ft., and who else showed up? Deep Fry. He had just negotiated 1,800 ft. of technical ice climbing on the north face of Everest. Then he decided to take a nap in the sun on the edge of the ice ledge. We continued our ascent and reached the North Col in glorious sunshine.

An hour later, on the descent, we passed Deep Fry still sleeping in the same place on the edge of the ledge. Whistling and calling him, we got no response, so we left him. We rappelled down our ropes and soon reached camp at dusk. Our worries about Deep Fry making it down in the dark were answered later that night when he raced through camp barking his fool head off.