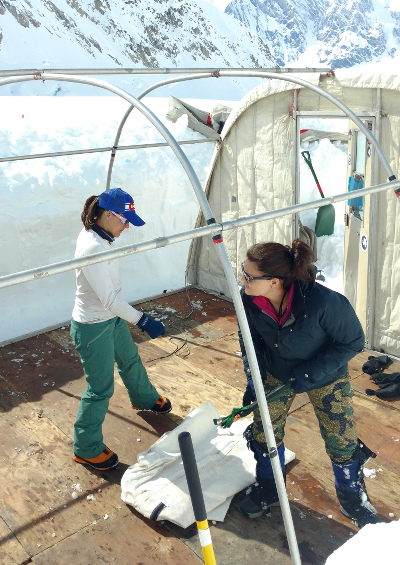 Setting up the SAS Basecamp tent in the snow pit

May 1st marks the beginning of the Denali climbing season. The village of Talkeetna, Alaska, becomes the first stop for a thousand or more climbers from around the world who hope to climb to the 20,320’ summit of Denali, as well as various other peaks in the Alaska Range.

Prior to the start of the climbing season, the U.S. Army ferries in gear by Chinook helicopter to the Denali base camps, located on the Kahiltna Glacier. For the past three seasons Brian McCullough, a local Talkeetna resident and experienced mountaineer, has been working with Sheldon Air to set up their camp. The Sheldon Base Camp consists of an 10X12 insulated weather port tent, solar panel, satellite communications, a weather station and shelving for the kitchen and living area. The Base Camp will be occupied for the next eight weeks by a camp manager who regularly reports weather conditions and activity to the Sheldon Air Service.

In 2015 and 2016, Brian’s two daughters, Natalie and Tenaya, and stepsons Ben and Ryan Conroy, came along to help with the construction. After Ryan arrived from New York, and Tenaya from Denver, the group had gathered in Talkeetna to check their gear and package food for the three day trip.

On April 29, everyone met at the Sheldon Air hangar for the flight to the Kahiltna Glacier. Jok, the pilot of the Cesna 185 on wheel skis, had flown this same route hundreds of times, but still seemed to relish sharing the expansive views and geology of the Alaska Range with others.

The one hour flight into the heart of Denali National Park follows the 45 mile long Kahiltna Glacier to the southeast fork, jokingly referred to as Kahiltna International Airport. During the flight, the team witnessed a massive avalanche roaring down the east face of 17,400’ Mt. Foraker, 14 miles southwest of Denali.

Though it was spring in Talkeetna, at the 7,200 ft. Kahiltna Glacier it was still below zero on the day of their arrival, with a light snow falling and five mile winds. Multi layers of clothing, and insulated boots, ensured warm bodies during the time spent on the glacier.

Brian, Ben and Ryan arrived with the first flight and after unloading personal gear selected a camp location parallel to the glacial airstrip, now delineated by a half dozen colorful plastic sleds on edge spread out over a quarter mile. Next, using snowshoes and sleds, they began multiple trips to move over five hundred pounds of materials dropped off by the Chinooks the several hundred yards to the camp. Shoveling snow was the next task– by now Natalie and Tenaya had arrived to help dig a 15’ X 15’ X 8’ foot snow pit. Over the next two months the glacier, with nearly 24 hours of sunlight, would melt at a steady rate and if the snow was not shoveled the weather port tent would end up on a pinnacle, or in a sink hole. The shoveling was easy for the first foot, but snow was packed and hard for the remaining seven feet. Snow had to be raked and spread evenly to ensure a suitable area for camp. This laborious task took hours, but was essential. 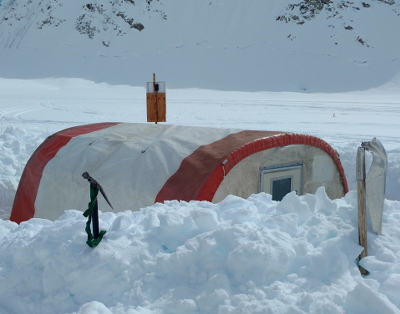 The tent assembly required it be done sequentially with all parts and pieces spread out and then constructed. It was completed by dark, but the team had already set up smaller mountaineering tents nearby and chose to sleep in these. Sometime around 2 a.m., the night sky came alive with shimmering curtains of green and pink northern lights – a unique display found in the northern latitudes when once viewed are rarely forgotten.

The morning breakfast was hot cereal and drinks, the first of many meals to be made in the base camp tent. Next the solar panel and communications had to be set up, as well as the kitchen shelving and storage area. With these completed, the group donned snowshoes and hiked out on the glacier to take a look at various routes up the mountain.

In three days, Brian and Tenaya would depart base camp and begin a climb up to the top of the 20,320 ft Denali.